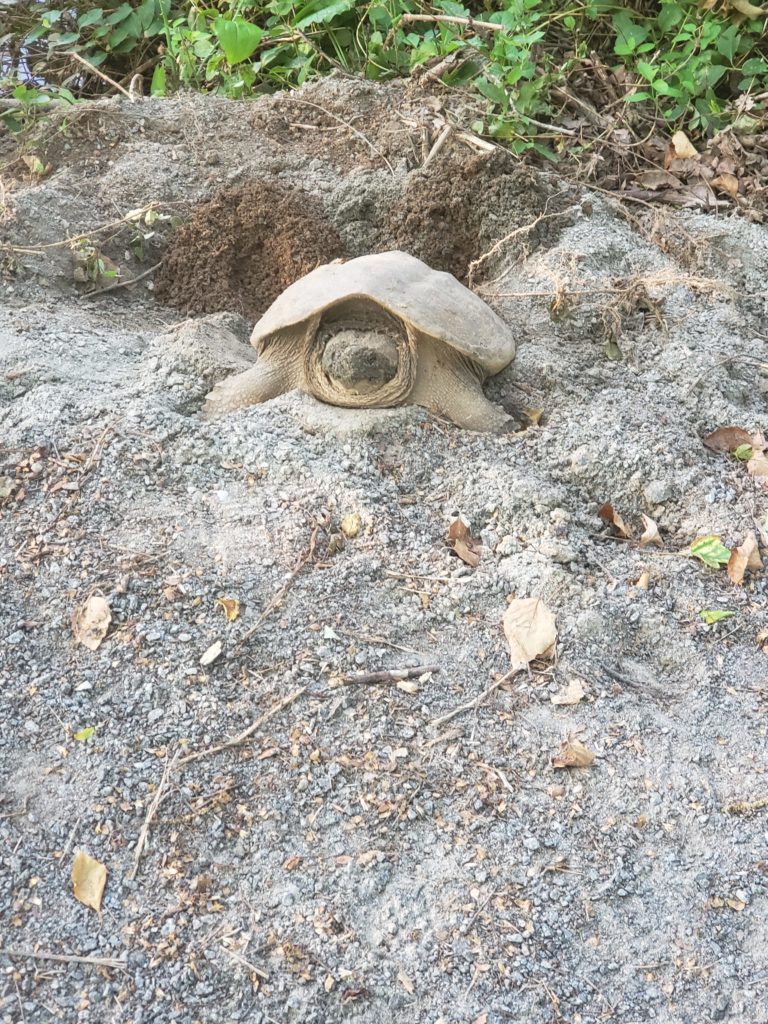 This week I came upon not one, but two turtles.  I had noted along the way that a new bridge had been built across the creek.  In seeing this, I knew immediately that this was the problem.  Their habitat had been altered, and they were displaced.

I began imagining the difference I would make in their lives if I could just get them back home and safe again.  I was especially concerned about the second turtle.  He seemed to be struggling to extract himself from a deep hole.  But wait.  Something was wrong.

The longer I watched him, the more I had to question what I was seeing.  Yes, he was digging, but not frantically or fearfully.  Instead he was digging very slowly and carefully.  Suddenly, in a flash, it hit me.  In this moment of quiet observation, I started to realize – I was wrong.  Wrong?  What is this wrong you speak of?  So unfamiliar to me (not).  But wrong I was.

First of all, this turtle was not a male, it was a female!  And she wasn’t kicking in fear, she was laying eggs! Not only had I assumed her gender, but I had assumed her condition and capacity based on my own perceptions and point of view.  I had taken one piece of information – the new bridge – and presumed that this perceived unfavorable event could make or break her.  Not only that, I had the nerve to believe that I, rather than she was best equipped to solve her “problem”.  After all, turtles have been making their way on this earth for quite some time.  Perhaps, she knows a thing or two about survivability, or thrivability for that matter.

Moving from my limiting perspective to one that was more true to this turtle took time.  Turtles are slow after all.  It took me only seconds to jump to the conclusions that I did.  But it took approximately 7 minutes of focused curiosity before I could begin to understand what I was seeing. 7 minutes was all I needed to appreciate that she has all she needs to manage this life of hers.  In those few minutes, she became so much more than a vulnerable, needy and/or snappy creature.  In being willing to just be with her, I had the privilege of seeing her rise up under that shell, emerge from the dirt, and turn with determination back toward her destination.  I listened, and I watched, and I learned from her that her problem is not the conditions of the world, or even the hole where I found her.  She may be displaced and impacted by her situation.  But she is also wired to live, and to survive despite the obstacles and barriers.  I understood in that moment that the struggle comes from the interference, not from the problem.  The resistance against it, and the effort to avoid it, to go around it, or over it is the source of the suffering. Our God-given talents and strengths are our purpose and must be expressed for us to survive and to thrive.

She is adaptable, resilient and resourceful.  She does not need me to solve her problems for her.   She only needs me to be patient, to resist my impulse to interfere for the sake of my own feelings of guilt, or frustration, or anger, or righteousness. All by herself, despite my worries for her, she laid her eggs, walked effortlessly passed me and that bridge, and gently disappeared into the water.

Thank you wise turtle for your patience.

Spring is Within Us All