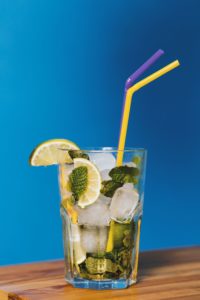 Yes, I ate the worm.  I had assumed that this is what people do, until I showed up at the ABC store asking specifically for tequila with a worm.  I was indignant; outraged when the gentleman informed me that I was weird.  He didn’t say it quite like that, but I could see it in his eyes.  It’s not what you say, but how you say it.  And trust me, he said it.  No matter.  Eventually he produced a very reasonably priced Mezcal, worm included.

It took my husband and I over a month to reach the bottom of that bottle.  And as time passed, that worm seemed to get bigger and bigger. Not unlike most problems – the longer you marinate in them or let them sit, the bigger they can become.  Swimming in all that tequila, there was no doubt about it, this worm was marinating.  It was clear, the longer he was in there, the bigger he was going to get.  We were running out of time.

My husband and I have a newspaper clipping from early in our 21-year marriage that is now framed in our home.  At first it was hanging on our fridge, but as it became more tattered and stained with time, it was obvious that we needed to treat it with more care if we wanted it to last.  It sits prominently in our home and serves as a quiet reminder to my husband and I to treat our marriage with at least as much care.  Not only for us, but I believe these “Tips For A Smart Marriage” are also instructive to our children.  And even as I have since found them updated on www.Smartmarriages.com, I think there is value in taking care of the “tips” we have rather than trading them in for the new and improved.

Number one of the 10 tips is, “It’s not the differences but how you handle them that separates successful marriages from failed ones.  Disagreement and fighting aren’t predictive of divorce.  Stonewalling, avoidance, disengagement, contempt, criticism and silent treatment are.”  For me and my husband, this tip is why we ate the worm.  We’re not in the habit of looking for a problem but bumping along through the small stuff is great practice when we know the heavy lifting will come soon enough.

Eating this worm was a process to be sure.  We started strong with mixed drinks a couple of nights during the week.  But then one of us got cold feet; then the other, until without saying a word, the tequila stopped flowing.  The worm was coming up to meet us before we were ready. Eventually, we had to talk about it.  What were we going to do? Depending on the day, we each vacillated between being confident and strong, to not being sure this worm was a problem we needed to solve.  Communication was everything.  Interestingly, when I was up, he was down, and vice versa.   We just kept talking until we were both comfortably on the same page.

The day finally came when we agreed – together, we could do this. We decided that he would cut the worm in half, and we would share it.  True to form, my sweet husband allowed me the smaller half. He chewed it, I swallowed it.  And it was done!  It was truly a celebration for the whole family!

Best of all, it wasn’t so bad. Since eating that worm, we’ve had our share of problems. But if we can eat a fat worm together, we can handle anything.